The nature of bees.

For me, a nice, sunny afternoon trip to see a functioning beekeeping farm was one of those serendipitous occasions where i get to do something for work that doesn’t feel like work at all. for Daniel Gaskins and his wife, Josie, this is their passion, a way of life. in fact, Daniel has been working with bees practically since birth. 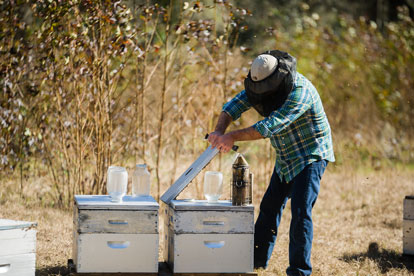 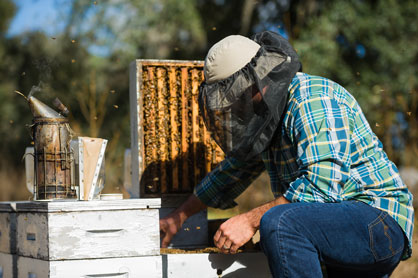 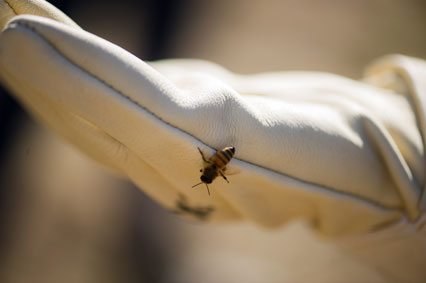 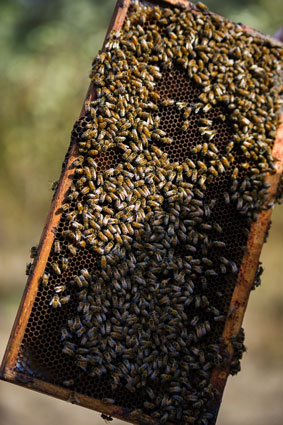 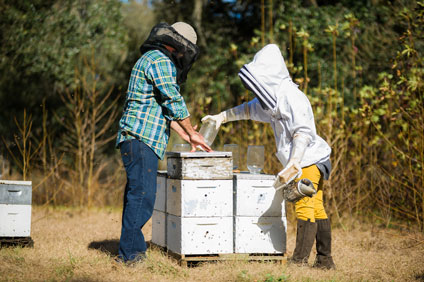 His father owned and operated JB honey for years in lake city. three years ago Daniel left his day job and followed that passion founding Gaskins apiaries. Producing some of the highest quality local honey around. When Family Magazine visited the apiary, the bees were in the midst of harvesting maple pollen for maple honey. the bees were soon to travel down south to the orange groves to pollinate the orange blossoms and making orange blossom honey.

As we make our way to the yard the bees are already buzzing about, busy working. I have to remind myself that i am wearing protective gear. my normal response to seeing this many bees congregated in one area would be to make a purposeful effort to go in the opposite direction. today, however, i am here for the bees. every bee has a job. from the time they emerge from the comb as fully formed insects, they instinctively know their role. they begin working immediately. Bees manage to cram a fascinating amount of work into their relatively short lifespans. as we make our way to one of the hives i get a rundown of some beekeeping terminology. Honey flow, the time when enough nectar bearing plants are blooming that the bees can store a surplus of honey. Hive, the home of a colony of bees. Super, this is the box with frames where the bees store the honey. this is usually placed above the brood. Brood, this is typically the bottom of two layers of boxes. the brood is where the immature bees are. your eggs, larvae, and/ or pupae. Smoker, this is the metal container with bellows, which houses a small amount of natural kindling and burning materials. the smoke is used to calm the bees. Daniel also explains the basics of the bee community and labor distribution. as your main types you have the queen, the workers, and drones. there are other more specific jobs and duties within the hive. But that is the basic breakdown. the queen is in control, she is the only fully developed female in the hive and she is responsible for all the egg laying in a colony. the worker bees are all female, but unlike the queen they are infertile and are responsible for carrying out all the duties. the drones, the male bees have it pretty easy by bee standards. “sex and eat.” Daniel laughs as he describes the main function of the drones. “lazy.” Josie adds in with a grin.

Each bee plays a huge part in the success of the hive. Gaskins apiary uses Italian bees as they are a slightly heartier bee with a generally good temperament. Daniel estimates on the low end there were more than a million bees out that day. even as i take notes the bees flutter around my pencil. landing on my hand, my notebook, and still i remained fearless. i ask Daniel how often he is stung, i feel like it must be the biggest question anyone would have for a man who personally handles bees every day in little more than a flannel shirt, jeans and a ball cap. “everyday.” he calmly responds in a matter of fact tone. Just another day on the job for him. “When the weather is bad or they are angry i can easily be stung 20 – 30 times a day. on a bad day i could have upwards of 100 stings.” “That’s a bad day.” he reiterates.

As he is pulling one of the wooden slats containing a honey comb, a bee finds its way to Daniel’s hand and proceeds to sting him. Daniel barely acknowledges it, other than to show us how quick it happens. “You’ve heard about bees dying after they’ve stung you?” He asks. “They do, but it isn’t right away, they’ll keep on living for about a day, they will even come back to try and sting you, if they had a stinger.” He presses the bellows on the smoker and soothes the bees a little as he continues looking through the combs to locate a queen bee. It is amazing the power the smoke has on the bees. What is even more fascinating is it is kind of a mystery even among beekeepers as to exactly why it works. “No one really knows.” Daniel explains. “Personally, I think it makes them think that the hive is on fire. So they stop concerning themselves with what I’m doing or what else is going on and they head back to try and save the hive.” But the smoke, no matter how or why exactly it works, is an important tool for Gaskins. Being able to access the bees and the hives is a daily necessity. From feeding to medicating, Daniel knows each and every hive. And if it were not for their short lifespan and shear numbers I imagine he might even know them by name. You see what makes Gaskins Apiaries so different from other commercial honey producers is the passion and the care he puts into the bees.

As I am talking to Josie about their goals of educating people about the importance of bees and beekeeping, Daniel can be overheard talking to the bees as he is putting the slats back in a precise order to avoid disrupting the queen and the hive. “Good girl.” He reassures one of the queens. “You know they have facial recognition.” Josie chimes in. “They recognize people.” I am obviously caught a little by surprise. “Oh yeah.” Daniel confirms as he walks up. “Their senses are amazing. Sight, smell. So much more than us.” “They are fascinating.” He says, it is hard for him to mask his love of bees. “If humans were capable of half of what bees are it would be amazing!” He isn’t wrong. Bees are capable of really incredible things. Their average territory is somewhere between 3-5 miles and they can adapt and learn new areas quickly. Their sense of direction is unrivaled. Perhaps most importantly, bees are the only insects to produce food for humans. Yes, that’s right. Honey. Aside from being delicious, honey has some wonderful health benefits. It has been shown to be an immune system booster, which is great for people with allergies.

Local honey typically contains pollen from your allergens enabling you, to overtime, build up a natural immunity while having a sweet treat. And few are sweeter, or more impressively tasty than Gaskins Apiaries honey. Happy bees equal great honey. Of that I am certain. After having spent a good portion of the afternoon picking the Gaskins minds about all things bees, I thought at this point I would be leaving the beeyard without a badge of courage. I would be departing without earning my honorary beekkeeper medal and then it happened. Like so many other times that afternoon I caught a bee landing on my hand out of the corner of my eye. My gloveless hand. That’s when it happened. The small, feisty worker bee sunk her stinger into my hand. Daniel quickly came over and scraped the bee off. “Never swat or smash it.” Daniel advises. “It will only put more of the venom in the wound.” I take his word for it.